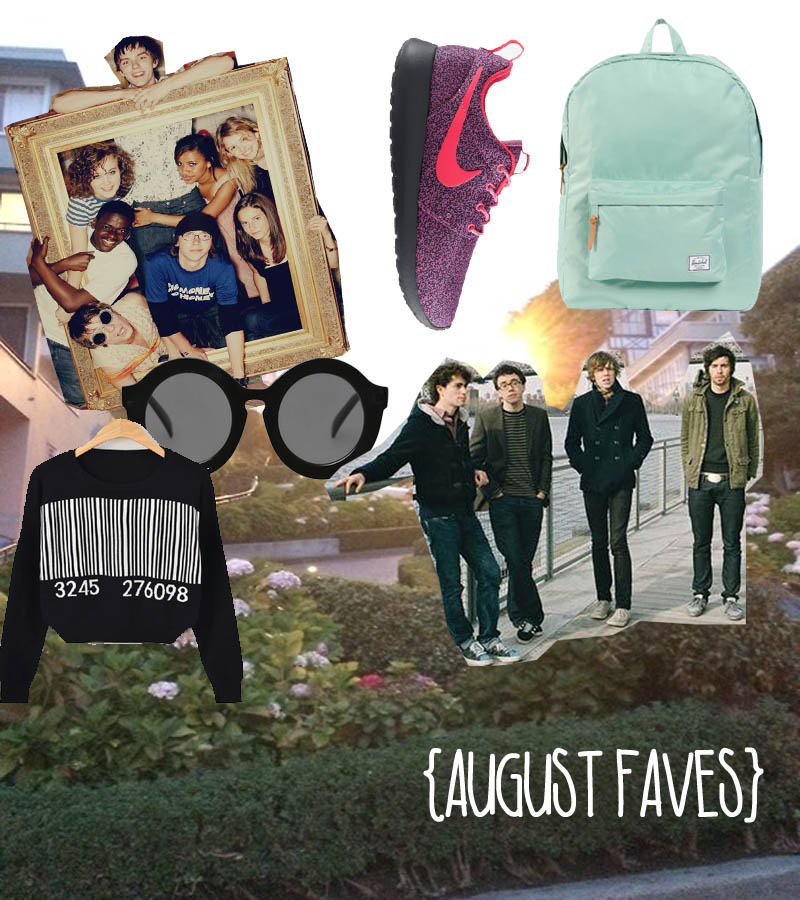 TRXYE – Okay this EP. Troye u r perf. I love Fun and Gasoline and Touch… I love all the songs.

Skins – This show is like the realest TV show ever made, don’t even fight me on this one. Everyone in this generation should watch it. You can relate with the characters /in some way haha/.  I only watched the first 2 seasons because I ran out of time? I made a mistake watching it a week before school when I could’ve watched it sooner. /I LOVE TONY AND CASSIE SO SO MUCH I SHIPPED THEM SO HARD BUT NOPE./

Nike Roshe – I want a pair for P.E class so I don’t have to bring an extra pair of shoes just to fit my outfit 😦

Cropped sweaters –  These are really good when it’s you don’t know what the weather would be like. People think cropped means you show skin but you actually don’t (it depends on the size you buy tho)?? The cut is just a bit higher but it covers skin. I wore a cropped sweater one time to school with flats and I got some compliments so ya. Also I don’t have to wear a hoodie so yaaas. To whoever invented these, A++. You go gurl… or boy.

Herschel backpacks – I want one sooo bad. I never thought I’d be using backpacks now that I’m in college but wrong. I have to especially during my MWF class. 😦

Country Chic B&BW body spray – I have been wearing this scent since the start of school. I looove this song next to the Warm Vanilla this has got to be my fave. This scent is great for rainy days and ya haha. And since Ber months are just around the corner, this is great too because it’s a Fall scent. Haha okay.

Love Letters To The Dead by Ava Dellaira  – I enjoyed this book so much. Aaahh. I’m too lazy to put the whole synopsis but basically there’s this girl who writes letters to dead famous people who like remind her of her dead sister?? Haha. This reminds me so much of Perks of Being A Wallflower. So 5/5 stars yaa.

That is aall xx

I’m sorry I didn’t update before summer ended. There was supposed to be a last post for Summer 2014. But oh well. // Also, I’m back to updating weekly. And here’s what happened to me on my first week of college (this is my first post about college WOW idk):

-On the first day (Monday), we were supposed to go to school in the morning but I didn’t. Haha. I was like oh well no one’s going to school anyway and I followed the sched that was given to me. I met up with batchmates at Mcdo. After catching up and shiz, we went to the gym and the line to go there was so long. Like wow. But thank God, there were 2 batchmates who let us cut in line. (Also thank God for batchmates). The orientation lasted for 4 hours, it was okay but unlike my 1st day orientation back in highschool I wasn’t nervous at all.

-Tuesday : We had regular classes and my first subject was P.E. Oh wow. Buut good thing, I have 2 blockmates who are my batchmates. Yaaas. One, I was classmates with for my sopho and junior year. The other, I was classmates with during junior year. We’re not that close but it’s alright, they’re alright because they’re nice and at least they talk to me. If I wasn’t blockmates with any of my batchmates I’d probably be a loner. Haha. Anyway, our P.E teacher’s funny and nice. Then we had 3 hours break because we didn’t consume the whole 2 hours. Also, I have a cute blockmate (I’ll talk about him later) and a cute classmate in Histo. Fast forward to dismissal, we had to walk because the line for the jeepney was so long. Ugh.

-Wednesday: Another orientation.  It was meh. Also, I got lost while looking for my friends. College lyf is tough especially when your on the other side of the mountain (WHAT HAHAHA). We don’t have 7/11, McDo, Jolibee, etc. Wew. We had lunch at a bar HAHAHAHA (kidding) then we had to rush because some of us had 1:30 class. Whereas for us, our next class was still 2:30. Anywayyy, that’s all I can remember.

-Thursday: My class starts 12:30, but I had to be there 8:30 because I had to meet up with my groupmates to do a project. Good thing, my friends had breaks in the morning. (yaaas). Okay now moving on, I’m seatmates with the cute blockmate and I’m ajshjtbat. I didn’t talk to him that day because I was too shy. HAHAHA. Now I have to look forward to every TThS to talk to him (LOLZ LANDI). I fell down the stairs and hurt my back. Thus, Salonpas is my new bff.

-Friday: OUR ALGEB TEACHER IS V NICE. I NEVER HAD A NICE ALGEBRA TEACHER. AND I GET WHAT SHE WAS SAYING. I UNDERSTAND MATH. #GENIUZ. Jk. I partly understand it because all the lessons we’ll be having this sem is college algebra. I had college algebra last year. So yey. Sometimes, I’m actually really thankful for the curriculum I had when I was in highschool. It was tough back then, but I understand why they taught challenging things to us that time, it was because they wanted us to have an easy college life. I guess? Idk what I’m even saying it’s only 11 in the morning. HAHA. Also, when I was in highschool, I always looked forward to Friday because it’s the last day of classes. But not anymore. You have nothing to look forward to in college (I KID HAHAHA). The things you’ll look forward to are early dismissal and no prof so you can go early.

– Saturday: HUGE FAIL. I thought my class was 11:30 so I woke up at 9:30 and started rushing. My service wasn’t there yet so I had to take a cab. When I arrived at school, I knew something was wrong. I didn’t see any of my blockmates and good thing I didn’t enter the room. That’s when I realized I had the same sched for Thursday. Ugh ugh. On the bright side, my friend had her break and we hung out a bit. Fast forward to Engl, I made the boy laugh I’m aisaghtay hEHEHH. He also knows my name already like?? Idk. But I’m not that kilig unlike when I was in highschool with you know who?? HAHA. Maybe I matured because now I know the difference of being friendly and flirting with people. Aw yaaas. Hahaha. Anyway, I don’t like him. Like I want him to be my friend but he’s not my crush? I’m done with crushes. All they do is ruin your academic life. I’ll stick to boyband members from now on. Hahahaha.

– I miss highschool so much I 😦 But it’s probably because I’m still adjusting and it’s only been a week anyway.

-I wish I can make more friends by next week. Hahaha.

-But I miss my friends.

-I don’t feel at home at college. Well not yet. But I hope I will be. I miss my friends, I miss my teachers even though some of them probably hate me or don’t miss me HAHAHA, I miss my batchmates. I just miss everything about highschool (Except probably some subjects) :(((

– Also the acceptance video at TCA’s of 5SOS. Thank you for doing that.  Also Ashton will regret that but I will never regret seeing that ;). That’s the closest I can get. (you know what I mean ;)) HAHA.

-NO CLASSES ON THURSDAy CAN I GET A HELL YES ATIRYHRT

That is aaall xx

These 15 life hacks will help you survive the whole school year, I promise. (Jk not all of them but…)

i.Know all the bathrooms in each building/floor. Because duh what if you have a pee or poo emergency and you don’t know where to go? Also know which ones are used the most and the not so used, the closest one to your room and yeah.

ii. Charge your phone the night before or always just bring your charger with you. Aside from your notebooks and pens, charger and earphones are your bffs. Okay so one time I left home with just 50% and the last thing I remember from that day is running from school to the mall to charge my phone. Yes, this actually happened and because I care for all of you I want y’all to bring a charger and not leave the house with just 50%. Also, if you don’t want to bring a charger, I suggest you save up for a powerbank. 😉

iii. Queue Tumblr posts.  Basically, you click on the reblog button on the post you want to queue, (yes just click not alt+click), look for the reblog button and hit the arrow beside it. A drop down menu (?) will appear and you hit add to queue. Tadaaa you just saved yourself from failing (both academically and blogging)

v. Can’t memorize constants/equations? Save them on your calculator. This is cheating but oOooOHhh who cares. I didn’t do this in high school because constants were always given to us so lol @ me. So you just type how to use the memory function of your calculator on Google and boom. You’re welcome. Also, don’t tell anyone if you’re going to do this because you can get in a lot trouble. So once the quiz is done, clear the memory.

vii. Headache? Drink a bottle of Gatorade. Apparently, it works. I haven’t tried this because if I get a headache I just sleep it off even if I’m at school so um yeah.

viii. Put Vaseline/petroleum jelly before you put on perfume on the back of your neck, behind your ears, your calves, your wrists if you want for it to last all day. Also if you don’t want to do that, you could always bring little travel sized bottles with your perfume in it so you don’t have to bring the whole bottle.

x. Make songs to help you remember the topic you studied. I’m pretty sure all of us can remember lyrics to a song, righhht?

xii. Watch tutorial videos on Youtube if you don’t understand a topic. Sometimes, you’ll learn more and you can pause.

xiii. If you’re hurrying, Times New Roman is the fastest font to read.

xiv. Always have gum or breath spray with you.

xv. Open your phone’s recorder, read out what you’re reviewing, and save it. Then write what you just said while listening to it. It will help you memorize it easier.

That is aaall xx

I Wanna Get Better by Bleachers

Stuck On The Puzzle by Alex Turner

Build Me Up Buttercup by You Me And Everyone We Know

The Wire by HAIM

Close As Strangers by 5 Seconds Of Summer

Smells Like Teen Spirit by Nirvana (On my first day of college, can this play in the background that would be pretty rad)

School Uniforms by The Wombats

Everything Is Alright by Motion City Soundtrack

That is aall xx